ArcelorMittal is present in Germany with production sites in Bremen and Eisenhüttenstadt (flat carbon steel) and also in Hamburg and Duisburg (long carbon).

Bremen
Steel has been produced in Bremen since 1957. The first blast furnace (HO IV) was blown in in April 1959. All the production facilities were started up in the following three years. More about the history of the Bremen plant can be found here.

Eisenhüttenstadt
In June 1950, the GDR leadership decided on the construction of the iron mill combine – Eisenhüttenkombinates Ost (EKO) – and a residential town. Thus began one of the most unusual chapters in Germany’s industrial history. The historic development of ArcelorMittal Eisenhüttenstadt – as the company is called today – is a very exciting corporate history. It was written by people who often dedicated their whole lives to “their EKO”. More about this here.

Duisburg
In 1851, the “Niederrheinische Hütte” blast furnace works was established in Hochfeld, from 1904 it was converted into a mixed steelworks, the first wire mill started up in 1913. Wire is still produced in Duisburg today, more about the chequered history of the Ruhrort and Hochfeld sites can be found here.

Hamburg
Hamburg’s steelworks were set up by Willy Korf in 1969. Production started in the rolling mill in January 1971. The steelworks followed in July 1971. At that time, the world’s second direct reduction plant, which still uses the Midrex process, came into existence in Hamburg. More about its history here. 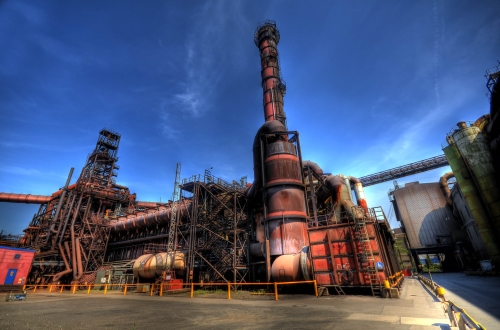