Jumbo record: 380 tonnes of Grey beams for a bridge

Luxembourg, 11 March 2013 – It’s a new record: tonight CFL cargo is transporting 14 jumbo-sized beams from the ArcelorMittal site in Differdange to the construction site of a Deutsche Bahn railway bridge in Dresden. Each beam from the Differdange Grey mill is 60.6 m long and together they weigh 380 tonnes.

Their transport to the final destination marks the culmination of one year’s work. It was in January 2012 that ArcelorMittal received this order, which represented a particular challenge: up until then, HEA 800 profile steel beams (rolled beams in concrete) had not been produced in this over-length. In order to achieve the required length, a 37 m-long beam and a 23 m-long beam were welded together at ArcelorMittal's C3P finishing centre in Differdange, before being loaded onto the train to Dresden.

Highest quality standards
Orders for Deutsche Bahn must meet the highest quality standards. "The welds must be just so in order to satisfy the demands made by Deutsche Bahn. Prior to transport, all the beams were inspected three times for production defects and potential irregularities," says Jean-François Liesch, General Manager of ArcelorMittal’s Differdange steelworks. "This project also demonstrates our flexibility and capability to adapt to the needs and plans of our customers - and to turn them into reality."

Tonight, the train is departing with the first 14 beams for the bridge and a second delivery is scheduled for 2014.  The 14 beams - bolted together into seven pairs – and the 21 wagons plus the locomotive bring a total load of about 790 tonnes onto the railroad tracks. 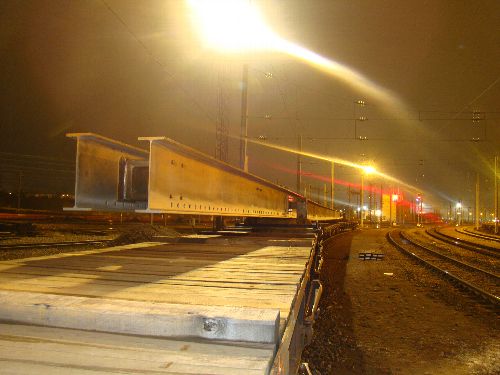 Three wagons for one beam
With each beam measuring more than 60 m, the transport had to be carefully planned. Since beams of this length had not yet been transported by rail, CFL cargo and ArcelorMittal, in cooperation with an engineering firm, had to first work out a detailed transportation concept. Moreover, the beams have to be delivered "just-in-time" – precisely when they are needed for the bridge construction in Dresden. CFL cargo is transporting them along specific railroad lines to avoid very tight curves.

The jumbo beams are being transported on groups of three wagons, to which they are secured by means of two custom-made pivoting, respectively pivoting and sliding crosspieces. "This ensures that the beams remain straight during the transport, while the wagons underneath can follow the curve of the railroad tracks," explains Fritz Crelo, CFL cargo Loading Expert and Head Wagon Inspector, who is personally accompanying the transport to Dresden.

Both the transport and the length of the beams are spectacular – never before have such long beams been transported over such a long distance from a production site to a construction site, requiring customized wagons that were adapted by CFL cargo specifically for this journey. „Such an extraordinary project requires the seamless cooperation of many different teams, all working towards the same goal: providing the customer with high-quality products and services“, states Fernand Rippinger, CEO of CFL cargo.

"This job has been very challenging and exciting. We have therefore decided to enter this project into the Guinness book of records," says Fred Weissenburger, the ArcelorMittal engineer in charge of this record-breaking project. “Our application is already in."

EN - Jumbo record - 380 tonnes of Grey beams for a bridge.pdf