She also took the opportunity to discuss current economic and political topics with Group Management Board member Michel Wurth and Frank Schulz, CEO of ArcelorMittal Germany.

The new rolling mill in Ruhrort is testimony to the strong commitment of the ArcelorMittal Group to the Duisburg site. This investment of more than 130 million euros will enable a significant reduction in energy costs and beyond this will also increase the plant’s productivity in addition to supporting jobs and training positions. The Duisburg plant supplies semi-finished products for forging in addition to highstrength and ultra-high-strength wire rods for the car industry and for applications in renewable energy (such as offshore wind turbines), for fastening elements and for mechanical engineering. 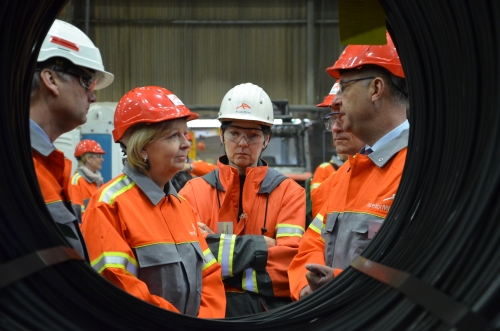 Michel Wurth, responsible of global long carbon steel production at ArcelorMittal, explains, “Germany is an important location for the manufacture of products with high value creation. The new wire rod ill will make a significant contribution to us being able to retain and expand our leading market position. We therefore appeal to public authorities in Germany and Europe to support the industry and strengthen its competitiveness.”

ArcelorMittal employs state-of-the-art energy management systems at all its German production sites and produces steel efficiently and sustainably - for instance, by partially generating its own electricity. As an energy-intensive company, however, ArcelorMittal relies on huge quantities of electricity which have to be bought in. The high electricity prices in Germany thus threaten the competitiveness of the energy-intensive industry and therefore also the future of the Duisburg plant.

In 2012, ArcelorMittal Duisburg - in spite of exemption provision as an energy-intensive company - had assessment costs due to the Renewable Energy Sources Act of just under eight million euros for electricity. This corresponds to a multiple of the profit before taxes (Ebitda) in Duisburg. By comparison with 2012, the electricity price for the site has increased year by 34 percent. If the exemption provision for the Renewable Energy Sources Act were to cease to apply and an electricity tax were to lead to additional burdens, this would mean potential additional costs of 14.5 million euros.

ArcelorMittal Germany’s CEO Schulz stresses: "The preservation of industrial competitiveness is a basic element so that the energy transition in Germany is successful. More planning security and increased sustainability for the energy and climate policy are as necessary as avoiding additional burdens for the industry which is exposed to international competition. This is to ensure that Germany as an industrial location has a future."

With a production volume of around 7 million tonnes crude steel, ArcelorMittal is among the largest steel producer in Germany. Its customers come from the automotive, construction and packaging industry, household appliances also belong to ArcelorMittal's customers in Germany. The group runs four large production sites in the country. These are two fully integrated flat carbon sites in Bremen and Eisenhüttenstadt as well as two long carbon sites in Hamburg and Duisburg. Moreover the group has seven steel service centers and 16 distribution centers in the federal republic. ArcelorMittal employs more than 8,000 people in Germany.

ArcelorMittal is the world's leading steel and mining company, with a presence in more than 60 countries. ArcelorMittal is the leader in all major global carbon steel markets, including automotive, construction, household appliances and packaging, with leading R&D and technology. The Group also has a world class mining business with a global portfolio of over 20 mines in operation and development, and is the world’s 4th largest iron ore producer. With operations in over 22 countries spanning four continents, the Company covers all of the key industrial markets, from emerging to mature, and has outstanding distribution networks.
Through its core values of sustainability, quality and leadership, ArcelorMittal commits to operating in a responsible way with respect to the health, safety and well-being of its employees, contractors and the communities in which it operates. It is also committed to the sustainable management of the environment. It takes a leading role in the industry's efforts to develop breakthrough steelmaking technologies and is actively researching and developing steel-based technologies and solutions that contribute to combat climate change. ArcelorMittal is a member of the FTSE4Good Index and the Dow Jones Sustainability World Index.
In 2011, ArcelorMittal had revenues of $84.2 billion and crude steel production of 88.2 million tonnes, representing approximately 6 per cent of world steel output.
ArcelorMittal is listed on the stock exchanges of New York (MT), Amsterdam (MT), Paris (MT), Luxembourg (MT) and on the Spanish stock exchanges of Barcelona, Bilbao, Madrid and Valencia (MTS).