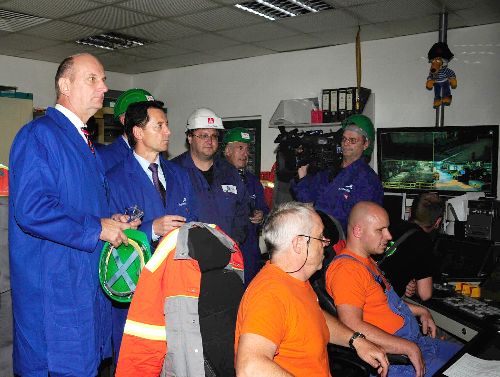 Minister President Woidke said: "The steelworks in Eisenhüttenstadt is one of Brandenburg's industrial anchors. It is impressive to see the continual investment in the quality of the products and the efficiency and safety of production. Only companies that work in this way can survive international competition on a long-term basis.

Eisenhüttenstadt is also successful because the company management and the Works Council are both pulling in the same direction. Without the commitment of the well-qualified workers, who have been supporting this site since the reunification and have fought to overcome the challenges facing it, Eisenhüttenstadt would not be the success story it is today. That's another reason why I look forward to our future collaboration and will do whatever I can to help."

The site which was established in 1950 as Eisenhüttenkombinat Ost (EKO) is best placed today, more than ever, to maintain its position in the competitive international marketplace. Thanks to continued investment into workers’ skills, technology and the plant itself as well as constant cost reduction measures, ArcelorMittal Eisenhüttenstadt is one of the top sites within the ArcelorMittal group and is a market leader in steel markets across the world.

"As the largest employer in the region, we are also very conscious of our corporate and social responsibilities. We value our good working relationship with the state government and are sure that we will be able to carry this forward with Minister President Woidke,” explains Matthieu Jehl, CEO of ArcelorMittal Eisenhüttenstadt.

"Over the past two years we have invested more than EUR300m in our German sites, nearly EUR80m of this in Eisenhüttenstadt. However, since the recession in Europe, the financial situation of the steel sector has deteriorated significantly. The fall in demand for steel and the high and volatile raw material prices have affected us considerably. What is needed in this situation is a consistent policy aimed at reinforcing industrial competitiveness, both in Brussels and Berlin, as well as here in Brandenburg," added Frank Schulz.

ArcelorMittal believes that the uncontrolled turn-around in energy policy is making it even more difficult to be competitive. Now, more than ever, the political sector must intervene to prevent this. Further cost increases must be avoided if the competitiveness of the sites is not to be put at risk. Speaking on the topic, Frank Schulz adds: "We are counting on support from the state government to avoid any additional burdens resulting from energy and climate policies."