Since September 2013, ArcelorMittal Bottrop has been operating an electrical power unit (Energy Module) together with the company ENVA Systems GmbH. The Energy Module partially substitutes a pressure reducing station, in which the pressure of the incoming steam is reduced, and utilizes the resulting energy for producing electricity for the coking plant’s wash water treatment. 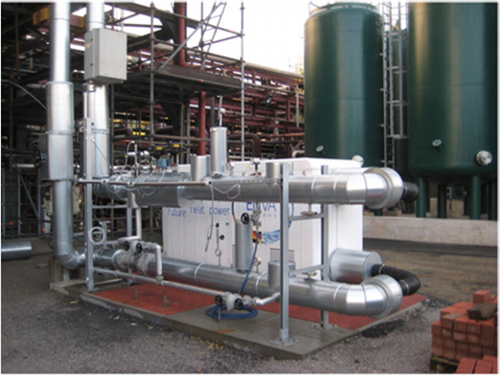 The Energy Module produces 80 KW per hour. This annual output would be enough to supply around 100 four-person households with electricity. The energy produced is fed into the coking plant’s power grid and consumed by various machines, plant sections, and pumps.

Using the electrical power unit within the range of the existing pressure level is a novelty for ArcelorMittal Bottrop. The use of the Energy Module makes steam turbines dispensable. This advantage has an effect on the operating costs, as turbines are significantly more expensive and require more intensive maintenance.

The Energy Module can be used in any branch of industry as, thanks to its compact modular design, it can be precisely tuned, both, electronically and thermodynamically, to a wide variety of situations. In simple terms, the electrical power output of a module results from the available enthalpy difference resulting from the pressure difference at the entrance and the exit of the machine, the steam mass flow rate in the process, and the quality of energy conversion.

Apart from its application as a substitute for a pressure reducing station, the ENVA Systems GmbH’s Energy Module can also be used as a waste steam utilization unit placed in front of condensers or chimneys. In this type of application, even the very last bit of energy can be squeezed out of apparently useless steam for producing power in a very cost-effective way. The special characteristic of the expansion unit, which is the core of the Energy Module, is that even low incoming pressure levels of around 600mbar on the Energy Module’s steam entrance side can be very efficiently converted into mechanical energy and, subsequently, into electricity.

On the issue of economic efficiency, ENVA-Systems GmbH explains that in case of full use of the annual capacity of the Energy Module, the operator will be able to have a payback period of less than three years. Apart from its advantages in economic terms, the steam system optimization achieved by utilizing the new unit also enables users to save CO2 and primary energy.

With its Energy Module, Prosper coking plant is making another contribution to the environ-mental friendliness of industrial plants and additionally helps saving costs.