Ebitda for the second quarter of 2014 also rose, by 29%, to €503m, compared with €390m in the first quarter of this year. This improvement has been mainly driven by higher shipments and cost optimisation efforts.

ArcelorMittal Europe crude steel production remained flat at 10.9 million tonnes, the same as in Q1 2014. Steel shipments in Q2 2014 were 10.2 million tonnes, an increase of 1.8% compared with the previous quarter. Flat product shipment volumes increased by 0.7% and long product shipment volumes increased by 4.2%, both benefitting from higher, seasonal demand and improved underlying demand.

Sales in the ArcelorMittal Europe segment also increased by 1.9% to €7.7bn, compared with €7.5bn in the first quarter. This was primarily due to higher steel shipments, offset in part by lower average steel selling prices.

Commenting, Aditya Mittal, CEO ArcelorMittal Europe, said: “Today’s results show the second consecutive quarter of improvements in ArcelorMittal Europe, underpinned by the benefits of cost optimisation and improved volumes. Growth in Europe remains uneven but with manufacturing output in the key steel demand sectors continuing to grow at a moderate pace, we have upgraded our growth forecast to 3-4%, up from 2-3%”. 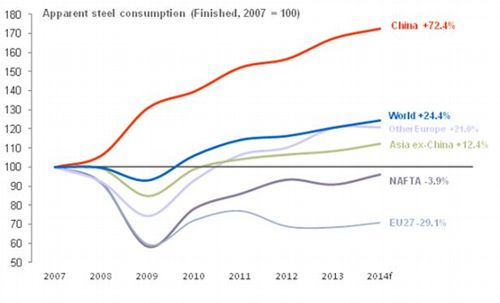 GDP growth for the Eurozone has been weaker in Q2 than at the beginning of the year, but is expected to pick up in the second half of 2014.