ArcelorMittal Bremen GmbH is located in north Bremen, right at the lower reaches of the Weser River. The site occupies an area of about seven square kilometres. Steel has been produced here since 1957.

As the second largest employer in the region, ArcelorMittal Bremen has at its disposition highly engineered facilities with which up to four million tonnes of crude steel can be produced annually. Our company is a modern integrated steelworks: all facilities from the production of pig iron to the processing of galvannealed sheet steel are unified on the grounds. This way, short processing distances is guaranteed which ensures an optimal production flow. 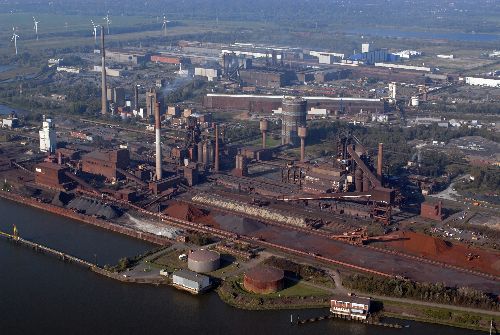 Qualification and training measures are regularly checked for their effectiveness. Using this approach, we have for many years steadily occupied one of the foremost positions in safety outcomes under national and international comparisons. Working in one of the heavy industries is often physically demanding. Because of this, our goal is to protect and foster the health of our workers.

Starting with about 7,500 tonnes of coal, the product consists of approximately 75% coke and 25% gas and recyclable carbon compounds. After cooling and sieving, the coke is delivered to ArcelorMittal Bremen’s blast furnaces. Around 45% of the gases are needed by the coking plant to heat the coking ovens and for other internal purposes. The remainder is sold to outsiders after fine cleaning and compression.